The church where the Kings of Italic Kingdom were crowned

St. Michaels Basilica is the main monument of the city of Pavia: it is one of the masterpieces of the Lombardic Romanesque architecture of the 12th century.

The cult of St. Michael the Archangel is linked to the rituals of death, the transition of souls, the ancient symbolism of the Seven Sisters, which connected the world of people alive with the world of the dead.

The character of St. Michael psycopompe - that is, the one who leads the souls to Heaven after death - incorporates some ancient cults of Lug (Celtic), Hermes-Mercury (Classical) and Thor (German). 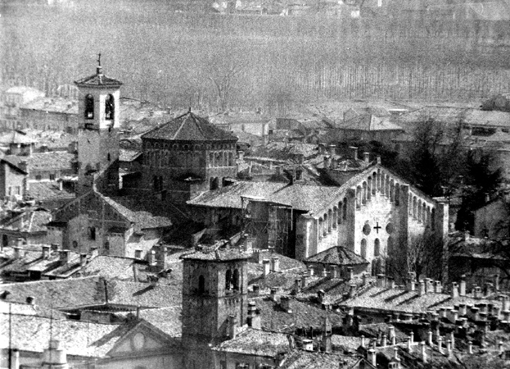 Moreover this church was planned in order to house the crowning ritual of the Kings of Italy, like a great scenic machine, whose appropriate light effects were obtained by means of the Sun. Holding a crowning ceremony in a church was started by Charlemagne.

Longobard Kings did not know it, as they were only applauded in front of their court. Here the kings Berenger I (888), Berenger II with his son Adalbert (951), Arduin of Ivrea (1002), Henri II the Saint (1004) received their crown. The church was rebuilt about 1130 and housed the crowning ceremony of Friedrich Barberousse as King of Italy, May 17th, 1155. 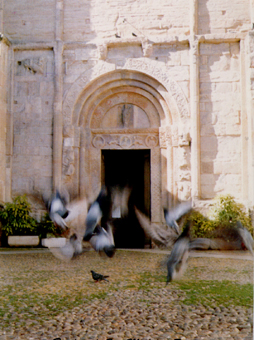 St. Michaels choir is wide, elevated by several steps with respect to the nave, and its floor covers a wide crypt. In front of the shrine you can admire the remnants of a great mosaic, with the Maze, the Months and the crowned Year, and other symbolic patterns of sky constellations.

The aisles are covered with galleries (lodges). 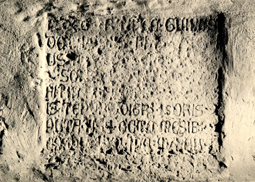 The centre of the church, below the crossing between the nave and the transept, is covered by an octagonal dome, a Medieval representation of the sky. The vaulted transept is higher than the nave. One of the windows of the southern transept, pointing East, shows an interesting feature: it has a bowed bottom, like its top. Few other examples of this same kind of window exist.

In front of the stained-glass window, showing a nineteenth-century image of St. Michael the Archangel, a niche in the wall - whose important role can be presumed by the fact that sun rays totally enlighten it in the most dramatic moments of the crowning ceremonies.

Under this niche, a mysterious stone carved in gothic characters is now indecipherable because of centuries of wear and tear.

At South head, a kind of porch or gallery can be found, consecrated to the Holy Mother, with paintings of Eastern style (perhaps a trace of the presence of the Templar Knights at this church, so closely tied to the Italic Kingdom leaders). 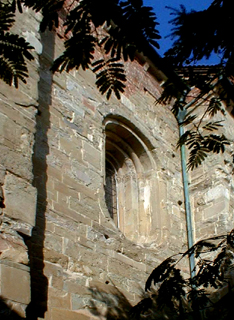 It is decorated by isolated columns. The niche's top is set by a horizontal beam. According to historian Giuseppe Robolini, the niche could have been designed to lodge the throne of the Kings of Italy. This hypothesis sounds reasonable.

The walking path of the king, in these ceremonies, was carried out from North (from the darkness) towards South, and then it turned from East towards West, in order to introduce him to people, that is watching in direction of the rising sun.

Little after 9 a.m. (local time), the sun entered from the octagonal dome, a symbol of the sky, came to hit the Kings head straight, in the culminating moment of the crowning ceremony. All day long the sun rays covered the symbolic distances between the mosaic and the sculptures in the church. The external gallery of the apse runs between the rectilinear walls of the tribune, with two corridors which end up on the transepts. Each of such escapes has a large stone, as a threshold. It was assumed that such thresholds sustained two wooden bridges, through the transepts, in order to allow a continuous circuit from the façade, through the lodges, until the apse.

It seems as if the lodges over the aisles were communicating with the external lodge of the choir, by means of a bridge which, supported by two stone protuberances, still visible, crossed the transepts of the temple. (C. DellAcqua, Memoria storicodescrittiva della insigne Basilica di S. Michele Maggiore di Pavia, Pavia, Fusi, 1862, p. 56). 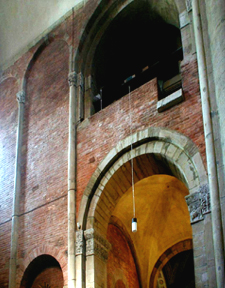 An accurate analysis of the walls of the transept, carried on during the month of August 2008, has revealed the presence of holes, nowadays filled, that were intended to house the extremities of large beams. In particular, such holes are well noticeable on the walls of the southern transept. The building apparatus of the walls, despite the many restorations, shows two different colour hues (darker in the lower area). The hue changes at the same height of the holes of the front wall, that is a perfectly compatible quota with that of the two stone thresholds, in the passages opened from the lodges and the apse gallery. This has suggested the recent hypothesis that there was not only a wooden bridge, connecting the two sides of the transept, but also that the entire surface of the transepts was lofted, with a wooden lodge supported by wooden beams. Such hypothesis is perfectly compatible with the quotas of the windows. 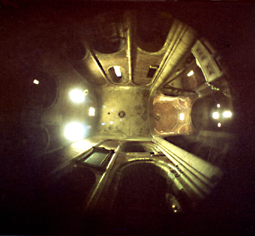 As far as the North transept is concerned, beyond noticeable traces of holes for beams, an entire stone bar, in the inner wall of the northern facade, marks the possible level of a loft.

The hypothesis of double decker transepts, with their lodges supported by wooden beams, is completely new and deserves further analysis and onsite checks. It looks fully compatible with the elevated height of the vaults in the transepts, quite higher than in the nave, and with the height of the windows, placed all over the lofts level. The resulting structure appears quite fascinating, remembering the West-werk of Saxon architecture. The position of such balconies had to be particularly panoramic, looking towards the choir, that stretches out under the dome, until to the centre of its octagon.

Unfortunately, we lack any detailed documentation of the Basilica face before the restorations of the 18th century. The horror of the restorers for any unusual detail avoided any deep study of the monument. Several details could have concurred to obtain a better analysis about the walls, at that time plastered or otherwise covered, about the existence of elements in wood or other perishable materials, about traces of stuccoes or different finish, never included in the mental catalogue of the restorers, at that period.

Moreover, such hypothesis is compatible with other Lombard architectural examples, as the transept of the Basilica of the St. Nazarius and Celsus in Milan, where separation diaphragms or curtains existed, separating the transepts from the nave, supported by columns. It would be important to locate, using instruments like a geo-radar, the possible presence of bases of columns between the transept and the octagon with the central dome.

The façade was covered with basreliefs, now highly corroded because of atmospheric pollution. These zodiacal and alchemic figures of bearded men, truncated heads, mermaids, signs, scenes of the sacred history and from daily life, monster and warriors, look to us as mysterious, indecipherable, but they were telling the medieval man a precise language, rich in symbols. 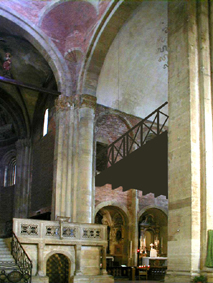 Queen Christina of Sweden (1626-1689) seems to be the last one understanding their meaning. The wear of the stone has by now erased these basreliefs, despite the attempts of restorations, but it seems  e.g. - that on the central portal there was the first image of a player with a modern violin, carried on his shoulder.

Its foundation was attributed, during the past, to emperor Constantine, to the Goths then to Longobard people. Afterwards, in the 19th century, scholars framed the Lombardic medieval art in the great family of the European Romanesque, an artistic movement bloomed about 1000 AD and spread over the entire continent.

The external walls were already highly corroded and reduced to little mounds of dust. In the period 1870-1875 a radical restoration was carried on. Stuccoes were removed, wide windows dating from recent centuries were closed, the ruined sculptures of the portals were re-made in their original style and the church took the look we are accustomed to today. From the period of the first analytical drawings and the first photographic pictures, the corrosion of the sandstone has strongly damaged the external sculptures.

In the Sixties a first consolidation was attempted, using techniques which were considered innovative for the times, but that ended to a disaster. A second attempt was done twenty years after, and a third one in more recent years. A terrible cloudburst in the summer of 1988 has definitely swept away what remained in the main façade. The areas carrying most of the characters of the external walls are by now - for the majority - definitely lost, and they could not be saved but using a mythical glass bell, built around the monument, as suggested in a provocative hypothesis. However, this monument and its context are in a very bad situation.

As an example, although several warnings, it is quite common to find cars parked behind the apse. This would be a shame for any civil country. 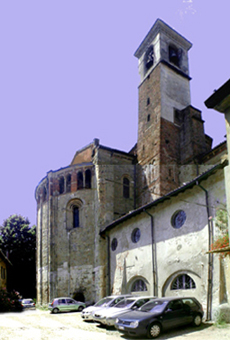 St. Michael is the most glorious and important among the monuments of Pavia, the highest point attained by a medieval monument family, dating back to the Romanesque period, that represent the true historical and cultural wealth of our city.

Despite repeated warnings, despite thousands of promises, it has been practically impossible to create a spread knowledge of the value of this patrimony and to awake a popular conscience for respecting monuments and their intrinsic value. 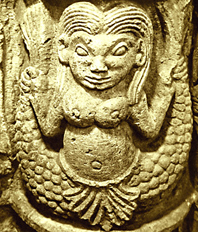 It is no use to call for mayday for the stones conditions, as they are now irreversibly corroded. A genuine care, a constant maintenance, a daily affection and a passion for a deep knowledge for the witnesses of our historical past and for the monuments are the indispensable ingredients towards the preservation of the treasures that we can find in our cities.

Thanks to Marisa Addomine for the translation assistance.