An extraordinary trip in the ancient Mediterranean World 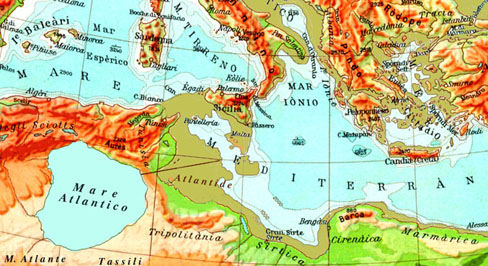 The end of the center of Atlantis caused various serious consequences, traces of which are the mysteries of those areas:

- The disappearance of the megalithes constructors, in all the area of the western Mediterranean. The local population had fallen back in a regimen of poverty and alimentary subsistence, than they did not be allowed to build great works.

- The successive occupations of the great islands (Sardinia and Corsica) from part of the sea-people made more and more to sink in the mystery the origins of that people of the megalithes that had preceded them.

- Perhaps a small group of survivors of the Tjehenu people conserved the memory of a part of ancient myths. Mythical Queen Tin Hinan, buried in the mountains of the Ahaggar, in the heart of the Sahara, can be a trace, at least in the permanence of the name, as the alphabet tifinagh, used in the most ancient Libyan-Berber languages.

A frequent objection has been: if all this history was therefore obvious, why nobody has ever written before. The answer is very simple: It is just because someone has written it, that we can tell this history. Plato has written, and with great precision; and the same did some of the most important scholars of the Ancient World: Eudoxe of Cnyde, Dyodore of Sicily and other ancient authors, with a precision that would be enviable by many modern reporters...
We must be grateful to the attention of Plato if the report of Solon on Atlantis went on to us: a memory that could disappear, buried in the oblivion, like many other forgotten events in the course of the history of the mankind.

This is an abstract of the Italian book: Atlantide. Un mondo scomparso, unipotesi per ritrovarlo, ed. Liutprand, Pavia, 2001.
The author, Alberto Arecchi, is an italian architect, and lives in Pavia (Italy). He worked for some 15 years in different countries of Africa, operating from 1975 to 1989 as an expert of the international cooperation for the development.
Alberto Arecchi is the president of the cultural Association Liutprand. His main professional interests are: restoration of historical architectures, bio-architecture, constructions with appropriated technologies, city planning, projects for development with strong popular participation.