Along many centuries the sundials measured the time on the exposed facades in sunlight, in the closters of the convents, in gardens and courtyards.
Meridian (from meridies = noon) are called the dials that mark only the noon and, by the length of the shadow along the seasons, indicate the months and the days, indicate the date like calendars, while more common sundials mark the hours along the daylight.
Happy hours as sad hours, is one of the maxims, sometimes happy, sometimes sad, written around their quadrants. 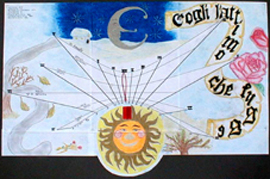 A sundial dated 1797, with the face of the Sun.
A horizontal sundial, designed by the students of the Institute Maragliano, Voghera.

Naturally, when the sun could be seen. In the two last centuries the majority of the sundials has gone lost, for a cultural reason, depending on the modern conception of the time, more and more precise, measured by mechanical clocks, until to the infinitesimal fraction of a second. Also when a palace is restored, not always they provide restoration of a sundial on its facade. 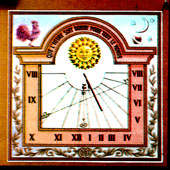 An iron stick or gnomone and a quadrant with the hour lines are the essential elements of a sundial.
You can always join decoration and a maxim that often reminds the lapsing of the things. Sundials can be vertical (on the walls), horizontal (on earth or on garden tables).
The walls exposed to south are the most adapted, but ther are also sundials created on walls that watch towards the rise or the sunset of the Sun. 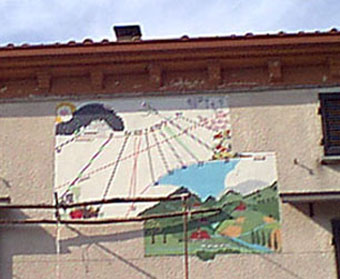 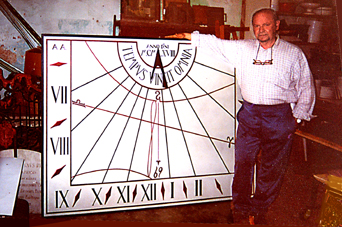 A sundial realised at Sant'Albano (Oltrepò, Pavia).
Realisation of a sundial on marine plywood panel.

Sundials can indicate the Italic hour or the French hour. The day always is divided in 24 hours, but with the Italic hours it begins and finishes to the sunset. The clock in Italic hours indicates the hours lacking to the sunset, to the end of the working day. At that hour the monks gathered in prayer, to sing the vespri.
The Italic clock is of rather complex reading, specially today, however it is instrument conceived in a vary smart way; it is adapted to the variable duration of the periods of light by the seasons.
The clock in Italic hours, used nearly exclusively in Italy at least from the twelfth century, was refused in the second half of the eighteenth century by local authorities and later it was abolished by Napoleon in favour of the clock in French hours (in which the midnight corresponds to the hours 024, as it is used still today).
Now, that the taste for the restorations imposes itself to most of the people and ancient architecture, like entire historical centres, are usually restored and recovered, it is important not to neglect the recovery of sundials, likeable element of external furnishings and records of an ancient tradition. 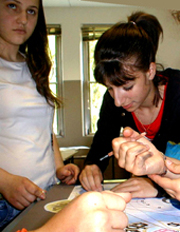 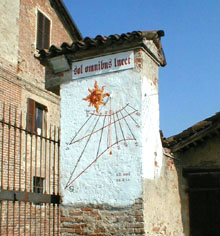 Students of the professional Institute Maragliano, Voghera, designing a sundial.
The sundial at St Lanfranco, Pavia (proj. arch. A. Arecchi, 2002).

Obviously, the restoration of an ancient sundial  or the construction of a new one  demands a precise calculation.
There was an art, supported on elaborated and often complicated tables, in order to trace the lines of a sundial and in order to define the inclination of the gnomone, which indicates, with its shadow, the current hour (or the current period of the year).

Today the calculation encounters the facilities of computerised programs, provided that the geographic data and the type of sundial that is desired to design are well defined.
At Pavia, as an example, we will remember some basic elements: the auction of the gnomone, that must be parallel to the terrestrial axis. For horizontal sundials turned towards the south will be tilted of 45° on the horizontal plane, and revolt towards the geographic North (not the one indicated by the compass, that is the magnetic North, moved of approximately 3° in counterclockwise sense).
The standard time of Pavia differs (in average) 23 minutes from the Italian hour, marked by mechanical clocks: at Pavia, it is noon when the clock marks 12,23 and on summer, with the standard time, when the clock marks 13,23. This because the Italian hour is based on the meridian of Central Europe, 15° East by the meridian of Greenwich, while Pavia is 9°09' East of Greewich.
The sun, in order to pass on Pavia, must therefore cover an arc of approximately 6° after to be last to the zenith of the hour meridian.
Since 15° they correspond to an hour of difference (from East towards the West), 6° correspond to 24 minutes.
It is an average difference, because the complex of movements between the Earth and the Sun makes that the hour indicated by a sundial changes, depending by the seasons, from the cronometric one, until to approximately 15 minutes ahead or behind. The shadow of the gnomone is not leaned exactly therefore on straight lines, correspondent to the hours, but on complex curves called lemniscate.
In the sundials, it is used to indicate the lemniscata correspondent to the shadow of the noon: it is a 8shapred curve, somehow lengthened and asymmetric. 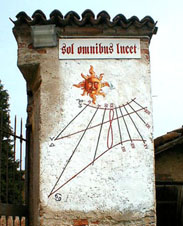 Another image of the sundial at St Lanfranco.

You are invited to restore the tradition, to decorate the facade of your houses with an element that constitutes also a scientific instrument, but that sinks its roots in our past, and that did not lose neither its usefullness, neither the capacity to transmit a symbolic message, of peace and reflection about the ineluctable passing of the time.
In order to restore or to build new sundials, you can address to us.