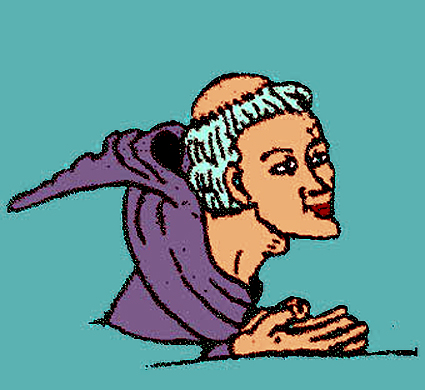 When in 924 Pavia was sacked by the Hungarians, the chronicler Flodoardus sympathized with the town:
"Which town in this kingdom shines more for its buildings? However, in spite of the fact that the houses were built in different times, and therefore under different zodiac signs, they were all destroyed on the same day".
According to the Medieval customs the several town districts underwent the astral influence and this also concerned the dedication, the disposition and the orientation of the sacred buildings. The symbolism related to the building shape is common in several areas: in Europe, in Asia, in Africa and in pre‑columbian Ame­rica. We find similar conceptions in China, in India, in Mesopotamia in Cairo or in Timbuktu in the middle of the Sahara desert.
A number of traditions are related to the history of Pavia, but here we would like to remember the ones which are linked to its people’s character. It is told that St. Siro, the first town bishop (who, as his name says, came from Syria) just before dying said: «you won’t ever achieve anything good in Pavia». Centuries after, Opicinus de Canistris wrote «I have been brought up among sheep and goats» and he went further: «There is a link between towns, places and some parts of the human body; Pavia, with no doubt, had the worst of them».
Opicinus de Canistris who lived in the first half of the 14th cent., beca­me popular both for the hard sides of his character and for his personal story. However, he is famous among the people in Pavia for having written a booklet praising the town addressed to the Pope in Avignon; for a long time this booklet was tought to be written by “Anonimous Ticinensis” that is to say an unknown writer from Pavia (i.e. Ticinum).
Opicinus was born in Lomello on the Christmas Eve of 1296 and was Counts Langosco’s friend, the last Guelph in Pavia then defeated by the Visconti family. Opicinus was a Guelph priest exiled in Avignon, he was ill, keen on paralysis and from that city far away, he recalled Pavia with its streets, its festivals and its Celtic and Longobard traditions. He did not only describe it, but he also tried to attract auspices on his town that had been excommunicated by the Pope because it was Ghibelline.
Opicinus concentrated all his theological knowledge in a huge quantity of drawings in which astrologic and allegoric pictures are mixed not only with saints and Virgin Marys, but also with ob­scene images. Besides, he succeeded in blending every aspect of it with the legendary wisdom of his homeland and with the sadness toward his fellow citizens.
"The Visconti family, as everyone else in those times, had a soft spot for spells, ma­gic and astrology. A century later, Filippo Maria loved to be sorrounded by astrolo­gers and wizards. Galeazzo, Matteo’s son, more than just an apprentice, was a real follower of this science... Matteo used to call devils to ask some advice... and it was told that he confered with two friendly devils, one in a spring and the other in a cave, whenever he had to bring to an end one of his enterprises". (A. Visconti, La biscia viscontea, Milano, 1929). 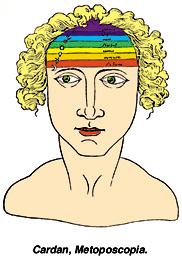 Jerome Cardan (Pavia, 1501 ‑ Rome, 1576) was a scientist in the humanistic meaning of the word: physician, mathematician (the universal joint inventor) and wizard. Professor of Medicine in Milan, Pavia and Bologna, wrote Moral, Medicine and Mathematics texts. In 1554 he published an important commentary to Ptolemy’s “Quadripartitus” with which he wanted to refound Astrology. In this work he ventured to interpret Jesus Christ’s birth astrological chart (subject objected by the Inquisition Court). Cardan was a bitter gambler and he devoted to dice or chess at least two hours a day. He also wrote a book about gambling. He thought to be hel­ped in his studies by a little devil (guardian genius) and in order not to lose his concentration he used to torture himself beating his own legs with a stick or biting his left forearm (as he used the right one to write). There was a time in which, fearing of being poisoned, he went around with two young servants who had to taste his food before him. On October 6th 1570 Cardan was arrested and charged of being heretic; he stayed in prison till December 22nd then he was forced to spend three additional months at home. During this period he wrote his biography as evidence of his innocence. He was sentenced to interrupt his teaching and not to ever publish books. He was granted a pen­sion by Pope Gregory XIII in 1574. He died in Rome on September 20th, 1576. Cardan wrote 54 printed books and 44 manuscripts about va­rious sub­jects: Medicine, Mathematics, Natural Sciences, Astronomy, Moral, Divinatory Arts. Besides, he burnt and destroyed a huge number of notes that he thought to be unuseful or that he had already enclosed in his works.